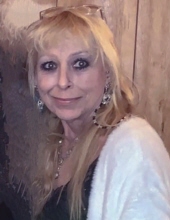 Virginia Hope Jones, loving mother, sister, and friend, departed this life at the age of 59 on August 6th, 2021. Ginny was born on July 28th, 1962, in Northern Virginia to Milton Meade Jones Jr. and Marsha Ann Whitehurst Jones. They moved to Cartersville, Virginia, in 1974. Ginny and her two brothers, Meade and Weldon, attended Cumberland County Public Schools. Ginny married her lifelong best friend, Rick Litton, and together they had Rebecca Litton, their greatest joy. Ginny worked and lived in Henrico for a while but she eventually returned to Cartersville to live out the remainder of her life on the family farm. Ginny lived her life with passion. She was a passionate mother, friend, sister, and artist. She saw the world through excited eyes and always looked for rainbows and magic. If she could not find magic, she would create it. Ginny is survived by her brother Meade Jones, her daughter Rebecca King, and her nieces and nephews Dakota Daves, Caroline Jones, Richard Jones, Ella Daves, Mason Daves, Thomas Daves, and Walter Daves. Her memorial will be held on August 21st, 2021 from 2pm - 4pm at 24390 Genito Rd, Amelia Courthouse, 23002. In lieu of flowers, the family requests a donation be made towards her memorial. The link to donate is below.
https://gofund.me/81546879
To order memorial trees or send flowers to the family in memory of Virginia Hope Jones, please visit our flower store.