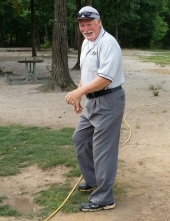 Wayne Thomas Latham, 68 of Powhatan, Virginia, passed away September 6, 2021. He was preceded in death by his mother Eva Latham and brother in law Ken Tiller. He is survived by his wife, Becky Latham; son, Gregory Latham (Morgan); daughter, Melissa Gregory (Brian); Sister, Debra Tiller; grandchildren, Jadyn, Lily and Tinsley; niece, Victoria (Brandon); nephew, Matt (Lauren) and their two boys, Carson and Cole; mother in law, Polly Robinson; Favorite Fur Baby, Shadow and a host of family & friends. Wayne worked for Philip Morris for 32 years and was retired, he also worked for Central Virginia Bank and C&F bank after his retirement. Softball was his life, he both played and was an umpire. He was known throughout the softball community and a top player being inducted in the ASA and USSA Hall of Fame. He played for AJD. Shenvalley, Philip Morris, Murphy Law and several more. He umpired for High School, Middle School, Leagues and Girls Travel Ball. He was devoted to his church PCF. His eyeballs were his grandkids, Tinsley, Lily and Jadyn whom he cherished and loved to spend time doing their favorite things. In Lieu of flowers donations can be to Powhatan Christian Fellowship, 3308-A Pleasant Road Powhatan, Virginia 23139. A visitaion will be held at Bennett & Barden Funeral Home, Tuesday Sept. 14th from 6-8:00 PM. A graveside service will be held Wednesday at 11:00 AM at Dale Memorial Park Cemetery. Condolences can be made at bennettbardenfh.com.
To order memorial trees or send flowers to the family in memory of Wayne Thomas Latham, please visit our flower store.