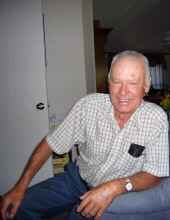 Wilburn Bernard Batterson, Jr., age 89, of Powhatan, passed away October 3, 2021, with his wife by his side. Wilburn was born on July 4, 1932. He was preceded in death by his mother, Doris Batterson; and by his father, Wilburn Batterson, Sr.; and by his sister, Mildred Strite. Left to cherish his memory are his loving wife, Judith; his daughter, Vanessa Gibrall (Patrick) and son, James Batterson (Mitzi), brother, Nelson Batterson (Dorothy). Also surviving are four grandchildren, Mary Grace, Noah, Patrick and Jake who all brought great joy to his life. Wilburn was a loving husband, father, grandfather, brother, uncle and great friend to many. He was a life-long Powhatan resident and will be missed by his family and community. Wilburn served in the U.S. Army as a military police officer during the Korean War. After serving his country, Wilburn was an automobile mechanic for 40 years. Wilburn will never be forgotten for his faith and his big heart. He loved gardening, fishing and spending as much time with his family as possible. In lieu of flowers, the family would appreciate your support of the New Walk Bible Church or the Huguenot Fire and EMS Department in Powhatan, VA. A gathering of family and friends will be held at Bennett & Barden Funeral Home, 3215 Anderson Highway, Powhatan, on Wednesday, October 6 from 10:30 a.m. - 12:15 p.m. followed by a memorial service at 12:30 p.m. at the funeral home. A private graveside service will be held at The Virginia Veterans Cemetery at Amelia. Condolences can be made at bennettbardenfh.com.
To order memorial trees or send flowers to the family in memory of Wilburn Bernard Batterson, Jr., please visit our flower store.