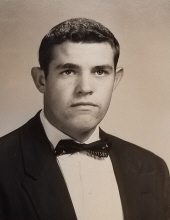 Hatcher, William G. (Gerry) 78, of Powhatan, passed away February 20, 2020. He was preceded in death by his parents, Billy and Effie, and his brother, J.O. He is survived by his sisters, Margaret, Mary Gayle(Richard) , brother, Bob, sister-in-law, Jackie, nieces Beth, Sara(Chris), Kris(Paul) nephew James(Laura), great niece, Abbigail, great nephews, Grayson, Easton, Levi and Bentley. A native of Powhatan County, Gerry played football for the Powhatan Indians coached by the legendary Hank Norton. A country boy, reared on a dairy farm, Gerry was used to hard work. So after football games or practice, when no one was able to pick him up, he would run home (a distance of seven miles) in the dark. He said that after a while, he got pretty good at it. After high school, because football was in his blood, Gerry continued playing football for VPI, the Quantico Marines and the semi-pro Richmond Rebels. FYI, a tackle on the Richmond Rebels team earned $100.00 per game. Gerry graduated from John Tyler C.C. with an associate degree in applied lab science( electronics technology). He began a career as an electronics technician (trouble shooter) with C&P Telephone and later AT&T. His job took him to San Jose, California, Marietta, Georgia, Roanoke, VA and Washington, D.C. Gerry was fiercely independent, a perfectionist, and meticulous about any task he undertook. He loved the outdoors and enjoyed hiking, canoeing, fishing and riding his motorcycle. He also loved his family. In his heart, Gerry never really left the farm and always had a fondness for farm equipment, especially tractors. In later life, Gerry developed severe osteoarthritis and joint problems, no doubt a result of his youthful, football passion. Though he loved the game, his advice to young people contemplating playing tackle/lineman would be- Think Twice! A graveside service will be held Saturday, August 1st, 11AM in the Powhatan Community Cemetery.
To order memorial trees or send flowers to the family in memory of William G. Hatcher, please visit our flower store.